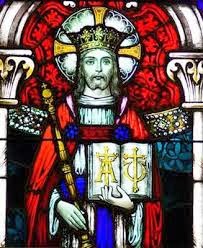 The feast of Christ the King was instituted in the middle ages when kings and queens were the common form of rule in Europe.  It is the feast which ends the Christian calendar.  It seemed fitting to end the year with recognition of Christ’s rule and reign over all creation and over all our lives.  But what kind of king is Christ?
First, we need to recognize that kingship was central to Christ’s mission. Matthew, Mark, and Luke speak with one voice in telling us that at the very beginning of his ministry, Jesus announced that the “” was drawing near.  A kingdom implies a ruler and realm. Then at the end of his life, the Gospels record an inscription on the cross, ‘This is the King of the Jews’.  But Jesus upended and undermined the whole concept of kingship. This world’s kingdoms are about power and prestige; Jesus was about service and humility. The rulers of this world are about coercion and violence; Jesus’ life was characterized by peace and reconciliation. Kings surround themselves with subservient aristocratic courts, servants and subjects. Jesus chose the lowly, the poor, and the unclean as his companions.
Secondly, we see what kind of king Jesus is by the sayings of Jesus from the cross. One of the powers of kings is to pardon those accused of crimes. The irony of the crucifixion is that Jesus was sentenced to die for claiming to be a king. However, even while being nailed to the cross, Jesus demonstrated that it was his executioners who were in need of pardon and he alone had the power to grant it. “Father, forgive them for they do not know what they are doing.”  In pardoning those who were executing him, Jesus showed us the power of forgiveness. Forgiveness frees not only those who are forgiven; it also frees the forgiver. When we forgive, we release ourselves from the chains of anger and resentment.
In another saying, Jesus speaks to the penitent thief and promises him that he will be with Jesus in .  Kings and rulers are usually surrounded by throngs of groupies or hanger-on-ers. One thinks of Louis the Fourteenth’s palace at , deliberately built to keep ’s nobles occupied in an endless round of meaningless ceremonies so that they would have no time to plot against the king. In contrast, Jesus surrounded himself with the outcasts and the marginalized. He crossed social, moral, and religious boundaries by accepting women as disciples.  He went against religious regulation and touched the lepers. His critics charged that he ate and drank with sinners, thieves and prostitutes. One Bishop remarked that Jesus does the same thing every time we celebrate the Eucharist!
Poignantly, the penitent thief pleaded, “Jesus, remember me when you come into your kingdom.”  Jesus replied, ‘Today you will be with me in ’.  “Remembrance” is central to Jewish thought. When the Israelites were slaves in , Exodus tells us that God “remembered” the covenant he had made with the patriarchs. The kind of remembering that God did in Exodus and that the thief was asking Jesus to do is not the opposite of forgetting; it is the opposite of dismissing or excluding. The thief was asking to be included, to be made a part of Jesus’ kingdom.
The Crucified and Risen Christ remembers not only us but also the forgotten, neglected and marginalized; he remembers us as we are – with strengths and weaknesses, the good and bad, successes and failures.  “Lord Jesus, remember me when you come into your kingdom,” prayed the penitent thief; but it is our prayer, too. Indeed, it may be the one of the most important prayers that we pray. Like the thief crucified beside Jesus, we pray that we may be a part of the great kingdom Christ is building in this world and the next.
A third way we see what kind of kings Jesus is, is by the way he is enthroned.  The way to Christ’s throne was not the royal enthronement of pomp and circumstance in a grand cathedral.  His enthronement was the crucifixion, the cross.  It was a shameful death, the death of one who was cursed.  His shame was our glory.  His curse was our redemption.  There was no royal robe, but he was stripped in disgrace.  There was no golden jewelled crown, but a crown of thorns.  This is our king, the son of God who chooses to be born in manager, to live a simple life of a labourer.  He came not be to be served but to serve and to give his life as a ransom.  He came not to command, but to obey his heavenly father.  He came not for fame and fortune, but to be rejected and despised by those in authority and power so that he might be our Lord and King.
His rule is never imposed or forced.  He comes in love to those who welcome him in simple faith.  His judgment is only against those who trust in their own righteousness and who live only for themselves; against those who chose evil and wickedness to oppress and harm others.  From the cross, God exalted Jesus to his right hand on high where he does not rule with force, but with love and patience, calling you and me into his outstretched arms.  Jesus is Christ the King.  He is a king like no other.  His kingdom is our hearts; his followers, the needy and despised, sinners like you and me.  He rules with forgiveness.  No one who comes to him in humility is rejected. His throne is a cross.  He invites you and me to turn to him in faith and to let him be Lord of Lord and King of Kings in our heart and lives, in our homes and in our churches.
« Parish of Harpenden 2013-11-25 10:32:00
Next Post »